The update you’ve all been waiting for… haha 🙂

This year I’ve really come into my best racing, so I’m glad I signed up for Ultimate Runner, as it pushed my limits and showed me that I truly can be fast again–the last time I’d say I was “fast” is high school.  12 years ago!

I saw Ultimate Runner on a race search, and it’s one of many Twin City Track Club races throughout the year.  I became a member of TCTC to get a discount on said races, and meet others who are “RunNerds” like me.  The race was featured in Runners World a few years back, but the kicker is–they only accept 100 or so entrants.  This one ended up taking 110-ish runners, but only 100 finished, which let’s you know that it’s tough and people do push themselves to the limit, and sometimes get hurt.

My preparation for the race was OK… but definitely not ideal.  I was loosely following a one mile training plan that I really liked, but what I didn’t like was waking up early.  I’m just not a morning worker-outer.  My ideal is 3-4 PM, but since that’s not possible, and lunch time is just so darn hot here in NC, then mornings it is.  I end up running 3 miles 3-4 days a week, with a longer run on Saturdays.  Anyways, my runs end up being at a comfortable pace about 80% of the time, which probably isn’t enough, and I knew I didn’t do enough sprints.  Next year my training will be different.

So… Saturday, June 27th was race day.  My wonderful friends PC & KC came at 3 to watch the kiddos, since J was working.  I stayed well-hydrated throughout the day, had a big lunch of grilled chicken, potatoes, and roasted veggies, and had a yogurt right before leaving.  Packed up 3 Gatorades (16 oz), several ice waters, 3 GU’s (only ended up consuming two), and a banana + Kashi bar if I got hungry.  In hindsight, shoulda packed a bit more!  Got to Hanes Park at 3:30 and picked up my race number (cut-off was 4 PM). 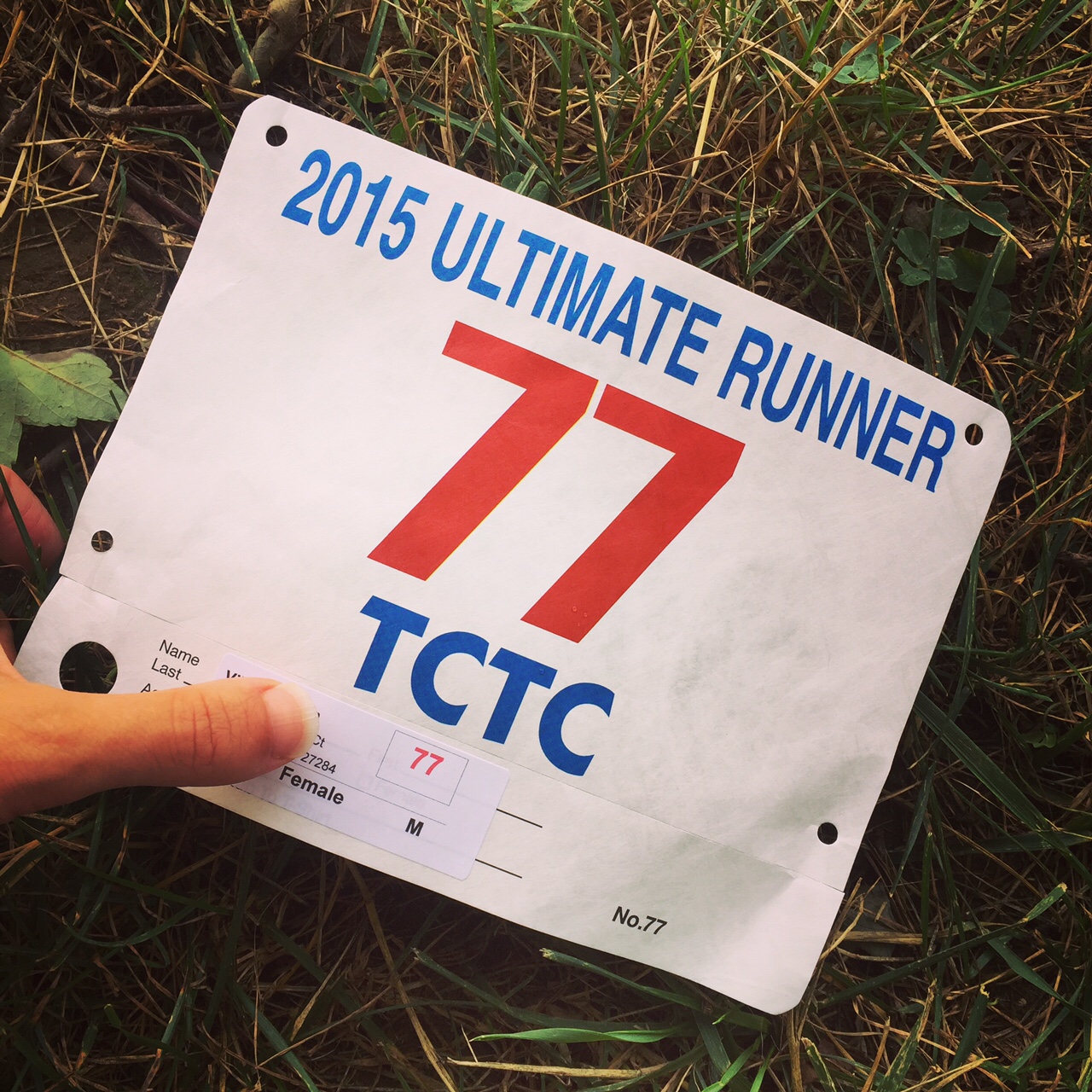 The # 77 is a lucky one for me, since my dad graduated high school in ’77, and Asher weighed 7 lbs, 7 oz when he was born.  The race is seeded by mile time, and since I submitted my one and only mile time (rounded to 6:45), that meant I was seeded 77 overall.  Which seems kinda crappy, until you see how amazing the runners in the field were.  Some were/are high school and college all-stars…. some stiff competition.  Just what I need to fuel me to get better.

The fastest dudes started off in Heat 1, and it was incredible watching their sub-5 performances in the mile.  However, two heats in and the race officials told us all to standby, as the rain came down hard.  Eventually, they told us to go to our cars because thunder and lightning came rolling in.  I brought a backpack (for the beverages & snacks, plus extra socks), chair, and umbrella, so I schlepped all this back up to the car.  I really REALLY had to use the bathroom but I waited out the storm–the hydration plan worked great, and thankfully they had clean indoor bathrooms at the tennis center down the track.  My biggest dilemma ended up being what to wear, as I had planned on a sports bra and my Asics shorts, but then figured with the rain, I’d be too cold in a sports bra, so I opted for the bright tank.

The rain passed (mostly), and definitely cooled down the day, for which I rejoiced.  Hate running in anything over 80* with high humidity.  I sat next to this lovely gentleman who reminded me of my Grandpa F.  His name was Jack, and it was his 29th running of Ultimate Runner.  He is the only person to run all 29 of them!!!  He was very humble about it, and at 79 years old, said that next year’s race might be it for him.  But I applauded him for being so consistent, staying healthy, and getting out there even though he came in last place for 4 out of 5 events (he rocked the 100 meters with a 21.3s, good for 94th place in that event!)  Here’s Jack, I believe in the 800m: 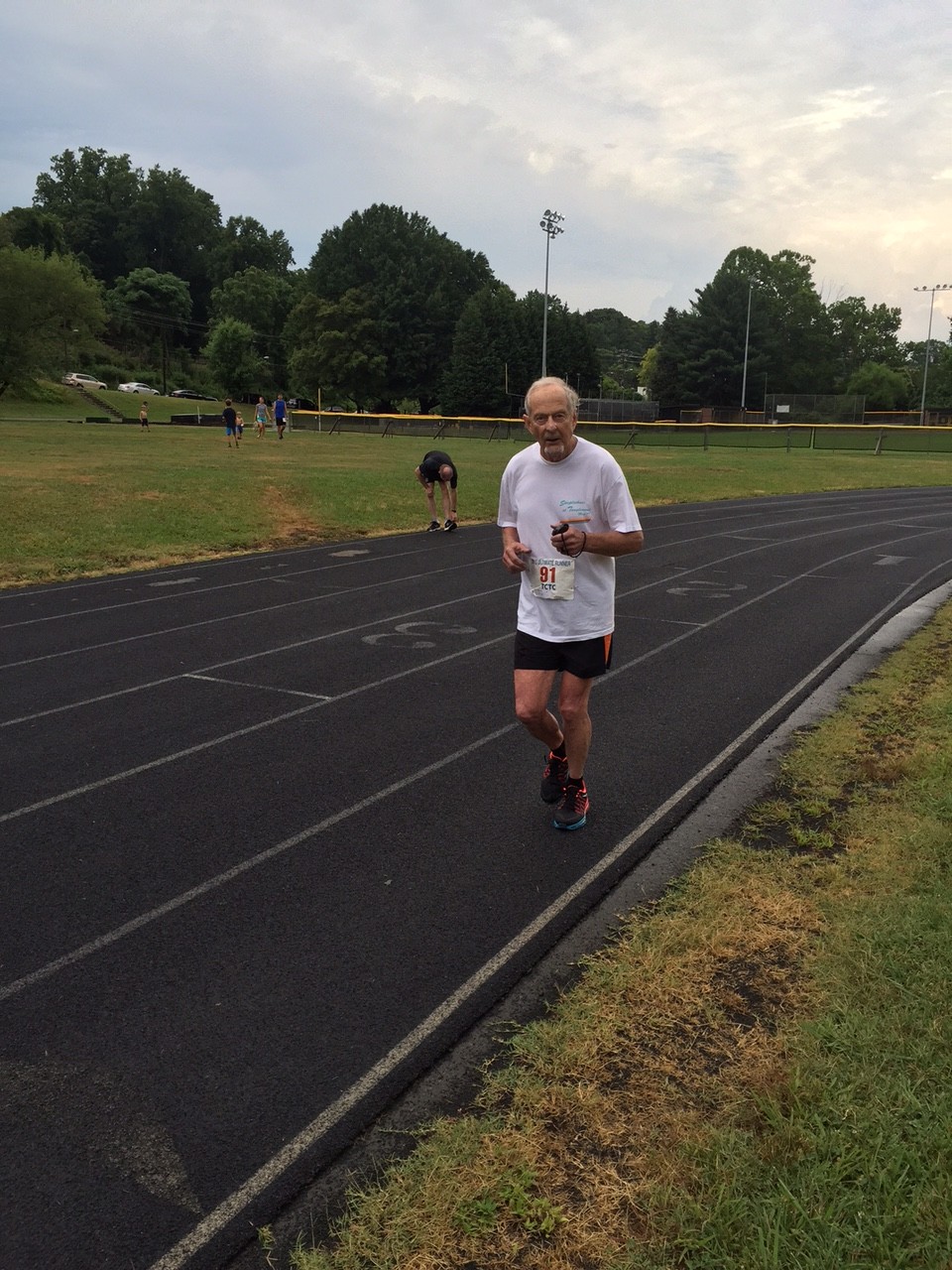 He was great to talk to, since I had gone to the race solo.

I felt pretty good, and just ran my own race.  Jack’s advice was to not get too excited, and stay comfortable but don’t give 100%, since there are 4 more events to follow!  I pushed it at around 90-95% per event, except for the 100m where I gave it everything.  The points are assigned by place, so if you come in say 37th place overall in the mile, you’ll get 37 points.  So the person with the lowest number of points wins.  I just wanted to place in the top 5, and/or win my age group, but after seeing how many competitive ladies there were, I knew it would be a challenge.

My goals vs. actual results, plus next year’s goals:

I was thrilled to run 1:13 for the 400m, I had no idea I could pull that out!  The biggest source of pride was running 15.1 in the 100–something I hadn’t run since trying out for the track team, unsuccessfully, at West Point in 2003.  I came in 2nd for females in the 100–that definitely boosted my overall ranking.  And let me know that next year I need to train sprints WAY more, and buy some spikes.

In the end, I finished faster than my 77th seed by 8 places.  While I didn’t place top 5 or in my age group (which is a big range, by the way: ages 30-39, with 11 of the 20 ladies in my age group!  Too bad I’m not still 29…), I have hopes that if I train consistently and focus on speed, next year will be a different story.  And by the way, that 5K was ran at 8:45 at night, most of it in the dark, on a wet cross country type course–not ideal at all.  I was so thankful my neighbor Stacy was running also, and ran with me for the 5K.  I had two close calls, where I nearly fell, so thankfully I could follow her through the darkest portions and ended up OK.

The coveted shirt, plus a sticker, which you don’t get until afterwards (in my case, had to sweet talk the announcer to give to me early.  He was going alphabetically, which stinks for a “V” like me, and it was past 10 PM!):

He then asked me if I’m doing it next year, and my response: “I’m doing it!”  And you better believe I’m gunning for top 5, so I can get one of those mugs! 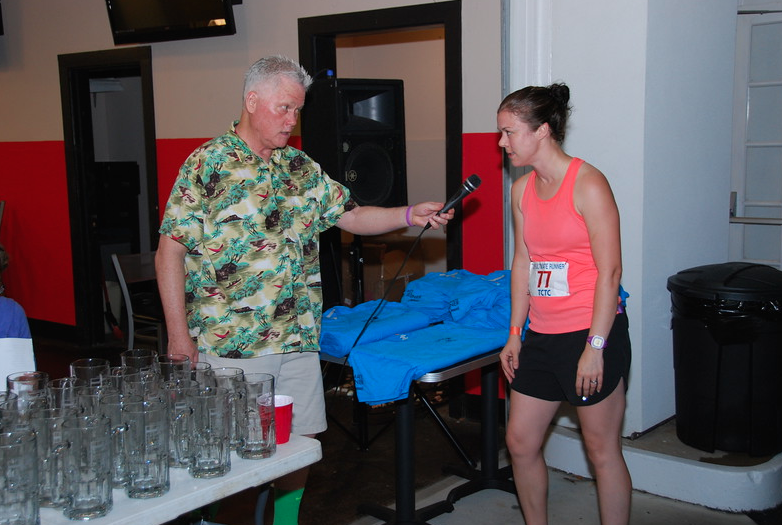 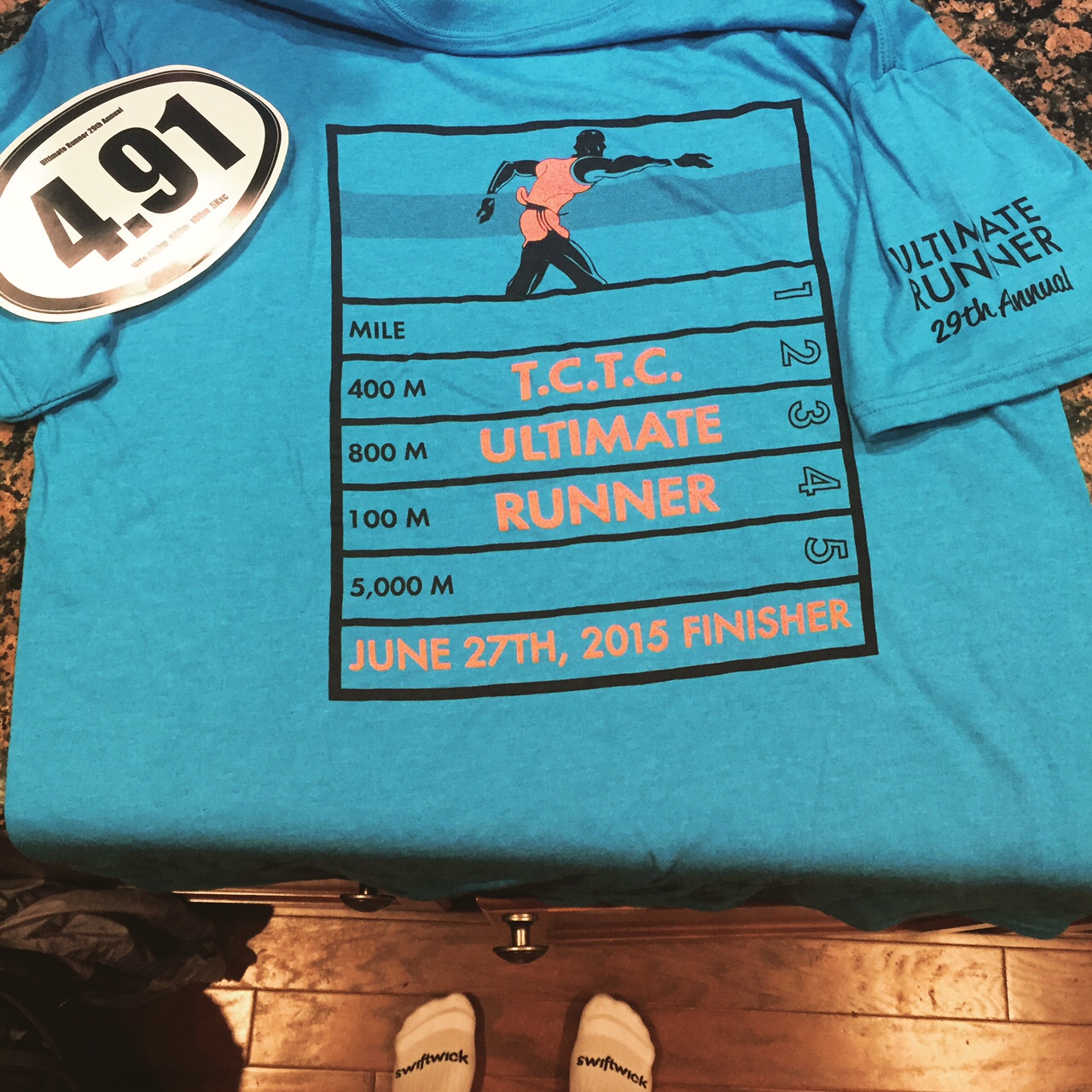 After party was down the road, thankfully not far of a walk for my aching legs.  Pizza from Mellow Mushroom, and beer + cookies… ah, never tasted so good!  I was starving… having only eaten half a banana and the Kashi bar since my 3 PM snack.

The race certainly proved challenging, but I loved it.  Just up my alley.  Now I just have to stay focused for the next 51 weeks or so… 😉

Next up is the 4th of July 5K this Saturday.  I would love to place top 3 in my age group, as this race is a VERY competitive one.  Mileage for June was the lowest yet this year, at 55 miles, due to the mornings I cut the runs short, getting used to the new routine & new job, taking a weekend off when my friends came to visit, and the weekend I felt crummy and skipped running.  But we are halfway through the year, and I’m thrilled and thankful how well it’s gone!