Thankfully we were prepared… well, mostly 🙂

While I’d love to do a full story on this hike, à la Liz, my friend and teammate over at The Restless Wild (one of my fave outdoor/photography blogs!), I’m going to let the photos do most of the talking, and I’d add details where I can. I am picking up my new camera (eeeeek!) later this morning, then headed to the Camel City Elite meet, so I’m going to try to write a  oh who am I kidding… I’m gonna have an all-the-details blog here. 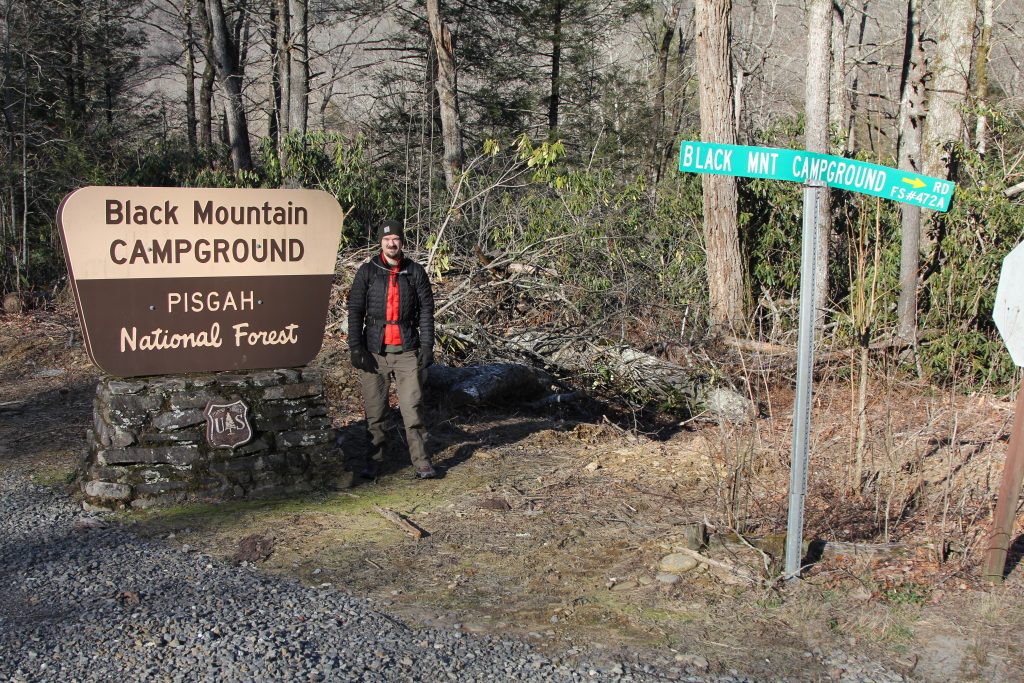 I first set out to climb Mt. Mitchell after returning from the PCT in August. My stepdaughter and I were going to go hike there in September, camp out a night, then come home. But life had others plans–we were both very busy, and then thunderstorms rolled in, so we didn’t have much choice: we cancelled our trip. Then along comes my brother, sometime in December, and says he’d like to climb it with me. He’s a cold weather type of guy, so he said he’d come down from PA in Jan/Feb. He also mentioned, oh so casually, that maybe we could also hike Clingman’s Dome, the highest point in TN (and the highest point on the AT, or Appalachian Trail). Thus began my researching and planning… because I’m a planner and I like to be prepared.

My plan A was to go early on Saturday, Feb. 1st, hike Mt. Mitchell, spend the night at the campground, head back, then drive to Clingman’s Dome (70ish miles away, as the crow flies), hike that, and drive home Sunday. After Google-mapping, I realized that would be difficult, due to the distances. I needed a plan that was easily doable in a weekend. I also found that the roads to both Mt Mitchell and Clingman’s Dome are closed in winter, as are the campgrounds. All good–we’ll stay at a hotel in Asheville! And we ended up reverting to Plan B–leaving on Sunday, taking the day off work so we could hike Monday, since the weather was very cold and wet on that Saturday.

Sunday February 2nd–woke at 6, left the house by 6:40. We had a nearly 3 hour drive to Mount Mitchell, mostly along I-40, which made it easy. With very little traffic, we arrived sometime around 9:15ish, with one rest stop. I had prepped nearly everything the night prior, minus my snacks–Joel had to prep his new Sawyer Squeeze, among other things. I somehow forgot my snacks–I guess I was thinking about how much I needed to pee, with all the coffee I drank! And also, I had a Mountain House lunch in my bag, and I wasn’t thinking the hike would be as long or as strenuous as it actually was!

We prepped our stuff, and since I was done first, I took a few pics… 😉

Couldn’t find a bathroom, so I went behind the outhouse building (which was locked) at the Black Mountain Campground. We saw several other couples getting ready to hike, so we weren’t alone out there. 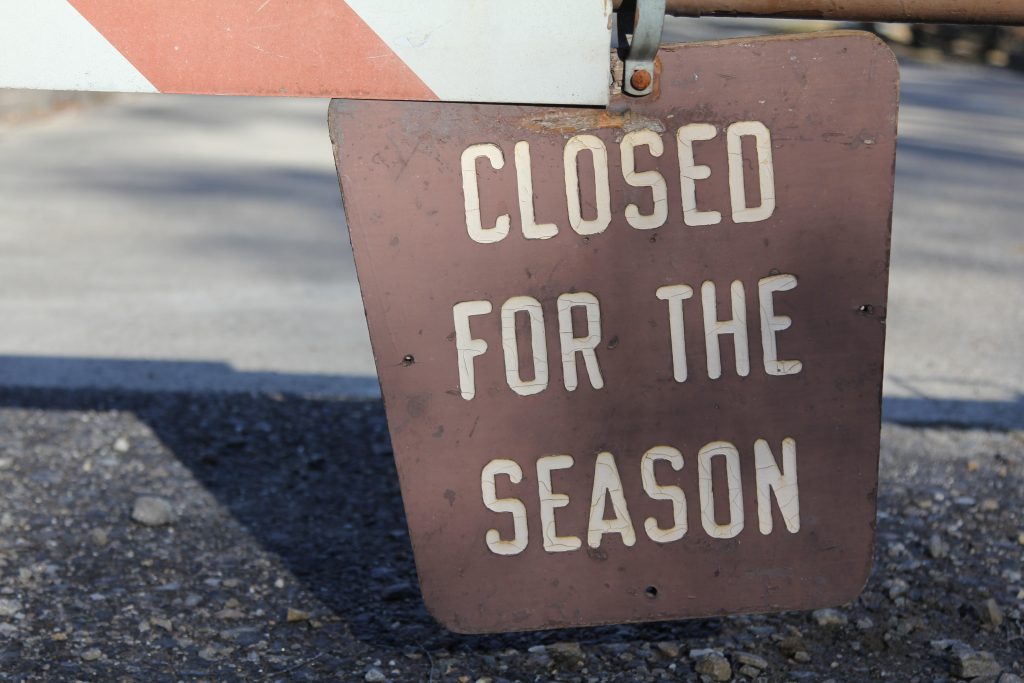 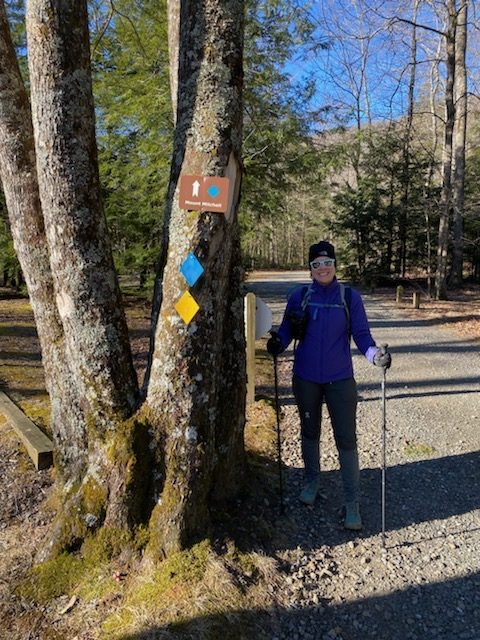 … And approximately one minute later, I felt my first twinge of pain, deep in my left hip.

Nooooooo I thought. We made it all the way here! My brother flew in from Pennsylvania, I carefully planned this trip we woke up early, I just drove 3 hours. No, no, NO! I WILL climb this mountain. PLEASE body, cooperate with me!

So I told Joel I needed to stop and stretch. I oh-so-gingerly did my usual pre-run warm-up of lunges, leg kicks, and leg swings. THANKFULLY that did the trick, and I was fine. Whew! Disaster averted. Note to self: must warm up before hiking mountains.

We quickly came upon the two ladies we had seen in the parking lot (in a Mazda Miata… we laughed a bit at the absurdity of driving such a small, low-to-ground car in the mountains, but I realized my Honda Odyssey wasn’t that much better!)  They were friendly, and we took a pic for them, so I asked them to take one for us: 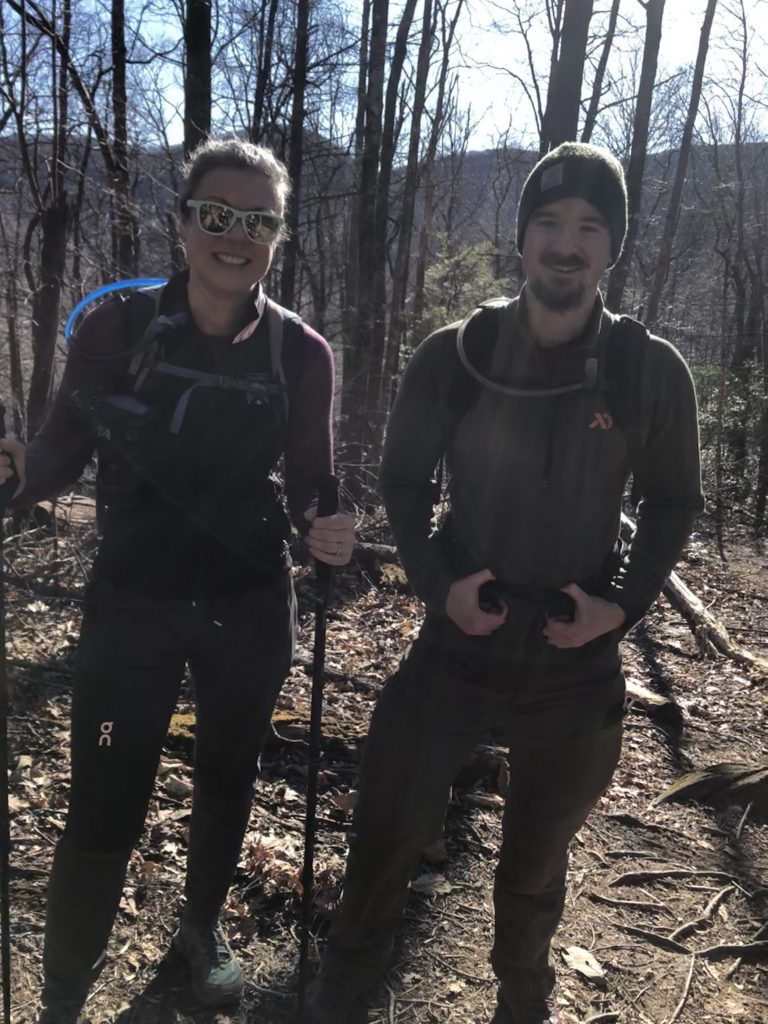 The first mile was relatively easy… uphill for sure, but not a lot of roots and rocks (those would come later!)  I was glad for my borrowed trekking poles (thanks KG!), and I felt like we had a good pace going. We stopped to remove our outer layer. We chatted nearly the entire time, except when I was super winded going up the steep sections, so the time passed pretty quickly.

About an hour in, we stopped for a snack break.  As soon as we did, the chilly air settled in my muscles. I put my hat on to stay warm. I realized that I forgot my snacks, except for the honey stinger waffles, so Joel shared his almonds with me.

We made it a quick stop and kept going. We hit the snow, and the going got much tougher. We had some great views though: 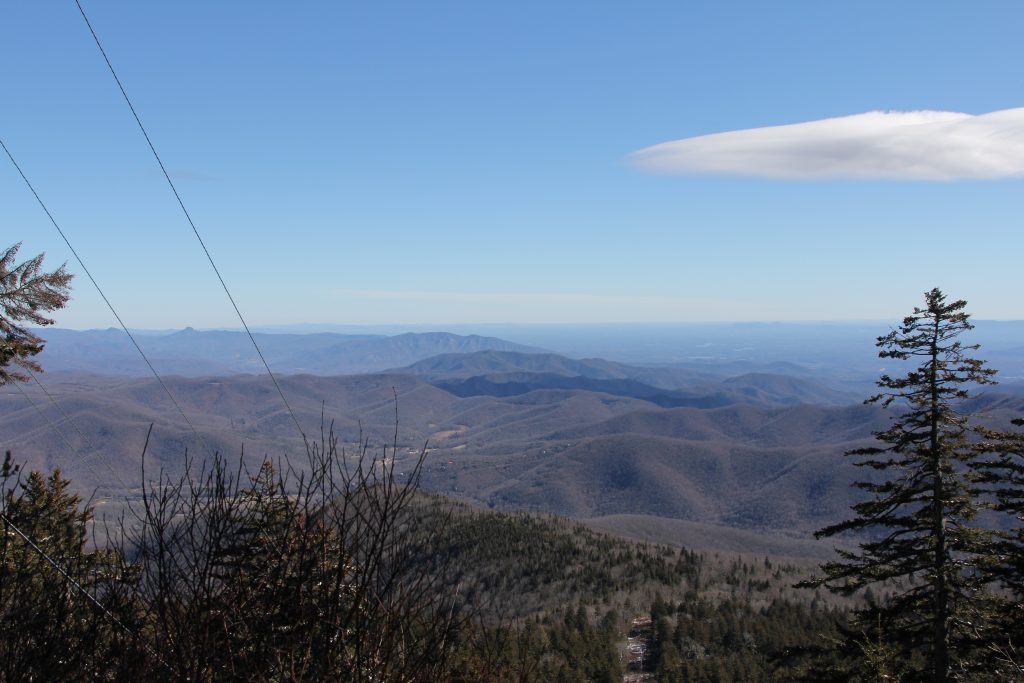 Now I understand why all the comments from this site explained that this was a very hard climb. With the snow, it added an extra layer of difficulty—slipperiness. I slowed down and watched my footing very carefully. We took another snack break at 2 hours, near some power lines.

We came across an older couple and their dog. “Beautiful day!” they said, and we agreed. The sun was shining, and it wasn’t too cold. We crossed a stream, and kept climbing. The trail looked like a green tunnel.

The snow got deeper. The other couple we saw in the parking lot came towards us. We wondered if they had reached the top? Soon enough, we had our answer: no, definitely not. They turned around at the 4 mile marker. We could tell from their footprints. I was blazing the trail now.

There was a lot of ice, deeper snow, and I was very careful in the 4th mile. My legs burned, and at a few points, I could barely keep going. It was just up and up and up. 800 feet of elevation gain that mile. I knew we were nearly there, so I kept pushing. Hunger gnawed at my near-empty belly. Breakfast felt so long ago. I couldn’t wait for my Mountain House freeze-dried meal, that we were saving for the summit. 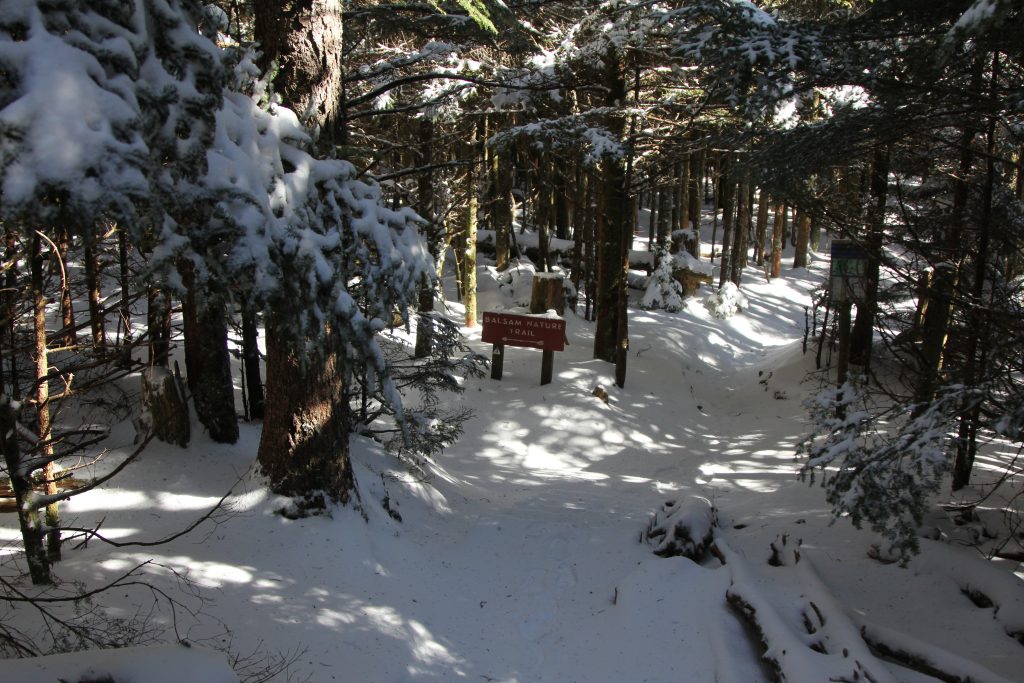 I was nearly spent, but I knew each step was one step closer to the top.

Somewhere in the last mile, I slipped and fell, landing hard on my left hip and left hand. Without gloves, the snow burned my hand. Thankfully I was OK. We were in a winter wonderland, but I didn’t even want to bother with pictures at this point (these pics are from the way back, when I was feeling much better!)

I had a singular focus of reaching the top… the last mile felt like ages.

Finally, the thick woods gave way to an open space, and we were there! 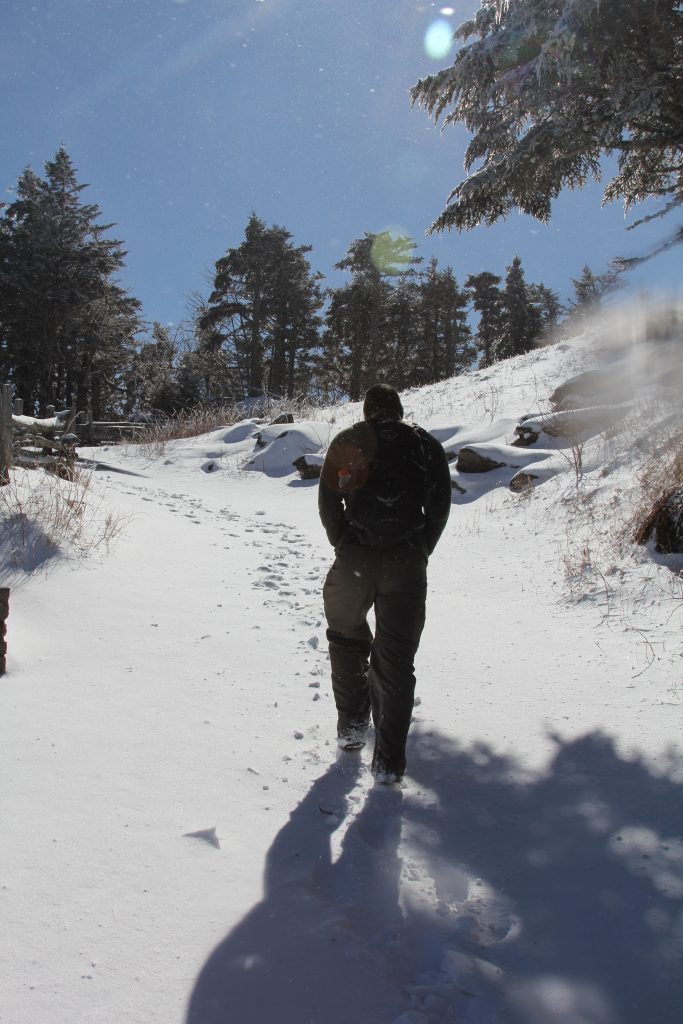 Adrenaline rushed through my body, and my fatigue subsided—we did it! In the snow and ice, on our own, 3+ hours up the side of the mountain, despite some hunger and a fall. 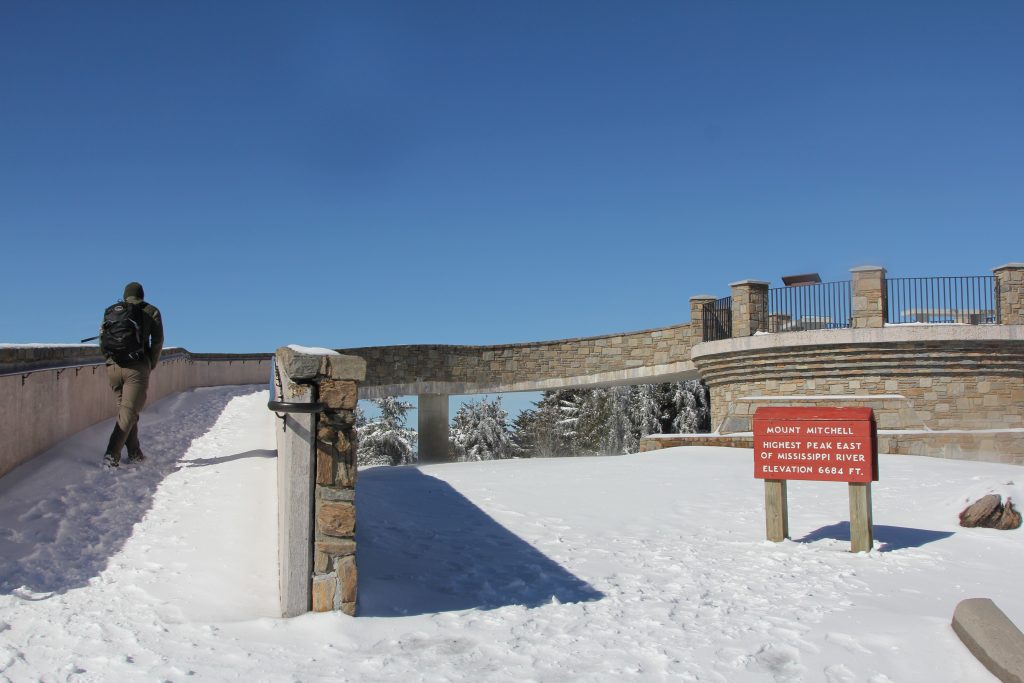 We enjoyed the views for a few minutes—we were the only people there, which was a very cool experience that not many get to have, I imagine. 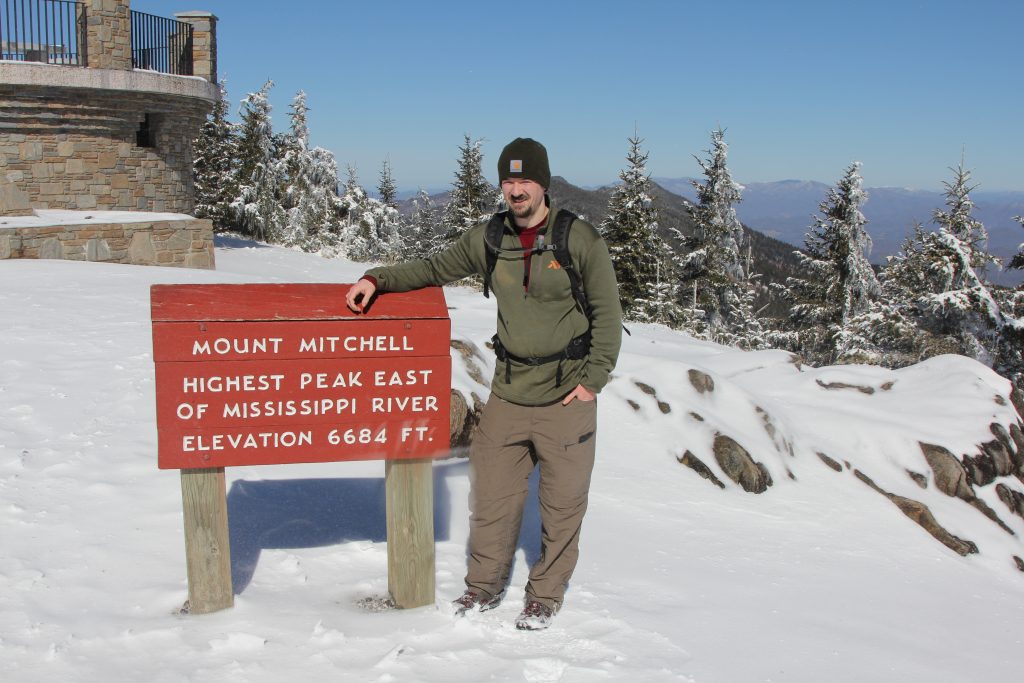 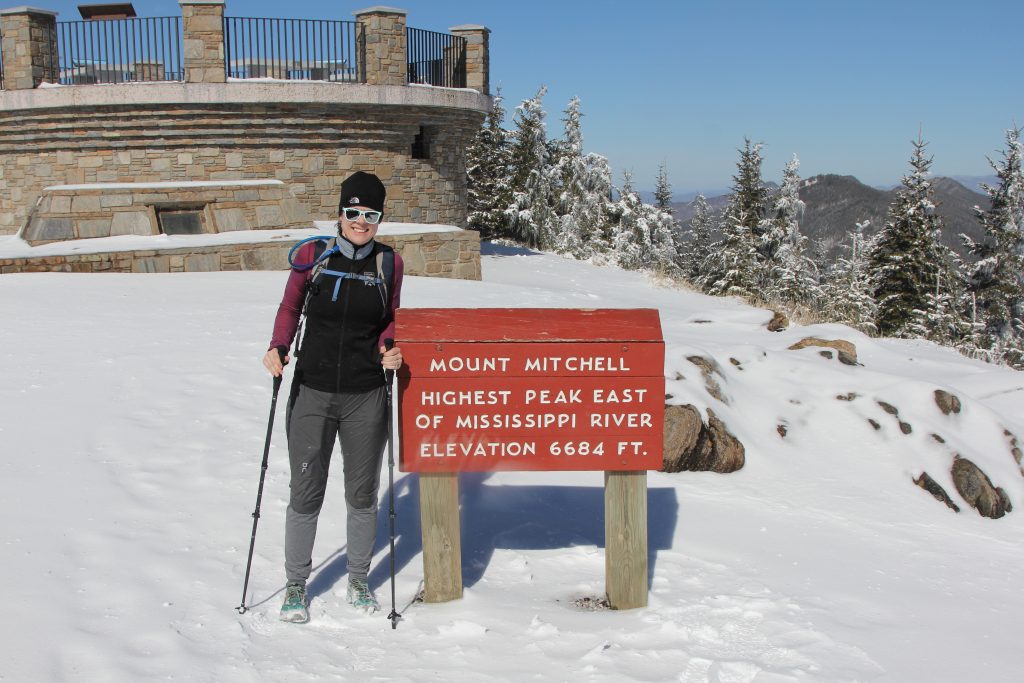 The top had plentiful snow, ice, and wind, so we didn’t stay too long. We hoped to find a place out of the wind—which was howling by this point—so we settled on a building with a little inlet.

Thankfully my new JetBoil worked perfectly, and we got it going quickly so we could scarf down our lunches. 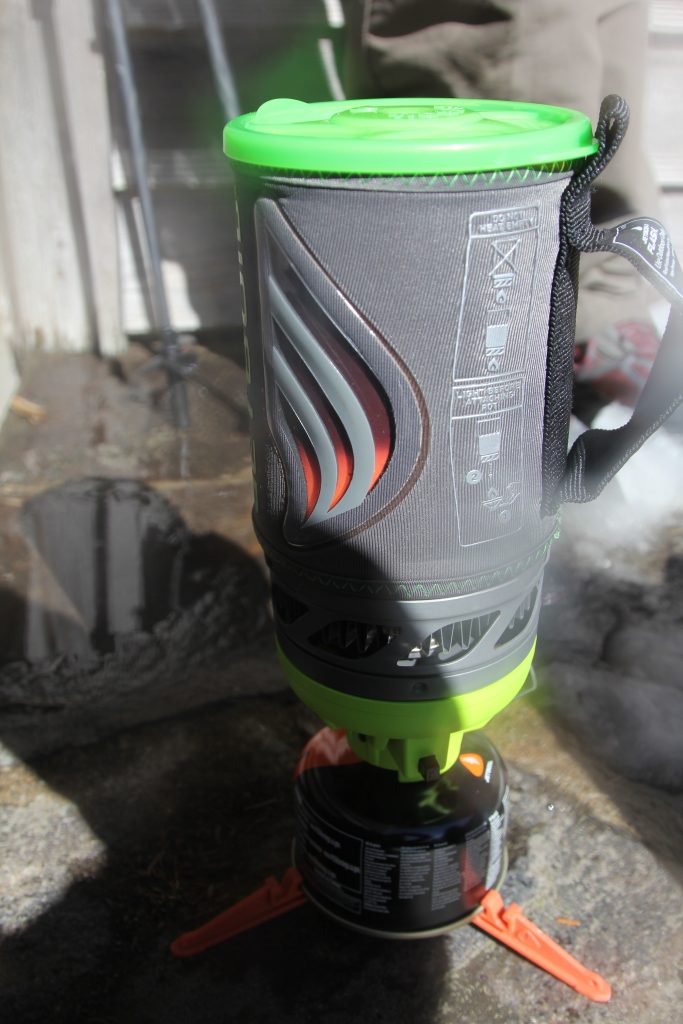 I had Mexican style chicken & rice, which was AWESOME (I think anything woulda been especially tasty though). Joel had my other meal, and we had to share my utensil because he forgot one.

As we were finishing up, a very fit-looking guy with skis came up and chatted with us for a few, then went skiing down the road.

Our total break was about 45 minutes for lunch and photos. We started back down the mountain at 1:45 (much later than I’d anticipated, but hey now I know to build in a lot more buffer time!)

The way down, though easier on the lungs, proved arduous (or “ahhhd-uous” like our New-Hampshire-raised grandma says) with lots of steep steps and ice. We carefully wound our way around rocks, roots, and thick ice patches. I did slip a few times, but thankfully—again—didn’t hurt myself. I needed a pit stop after awhile, and only there, with my bare skin hanging out, did I realize how cold it was when standing (er, squatting) still.

We were slightly faster going back down, but my legs felt soooo tired. My Garmin said it took 2:33 on the descent, but elapsed time was 3:08, so I definitely needed some longer breaks to let my knees, ankles, and quads rest. We took a long break to get some fresh water, and so Joel could try out his new Sawyer Squeeze filter. I didn’t really need any water, but I filtered 2 cups, then made a video (which I can’t figure out how to add here…)

When we returned to the van, it was nearly 5 PM. I had hopes of us reaching our hotel in Asheville by 5 PM (driving in daylight is way better for me), but we were over an hour away. Joel wanted to get a few things from REI, but we soon realized it would be closed before we arrived, so we headed straight to the hotel instead.

Originally, I had planned that we’d walk to a nearby restaurant to eat, but with nearly 12 miles on my legs, and 4,000 feet of mountain climbed (and descended!) I was freakin BEAT by the time we arrived at the hotel. All I wanted to do was shower, eat, and bed! So I talked Joel into just eating at the hotel restaurant so we wouldn’t have to walk anywhere. It worked out fine, we got these big juicy burgers with fries, and a yummy app of buffalo cauliflower.

Yes, we missed out on some Asheville culture, but with an early morning the next day—to climb another high point, Tennessee—it was way easier to just eat there and go to bed.

He watched some of the Super Bowl (I watched Grey’s Anatomy on my phone until the halftime show came on), then we turned in early. 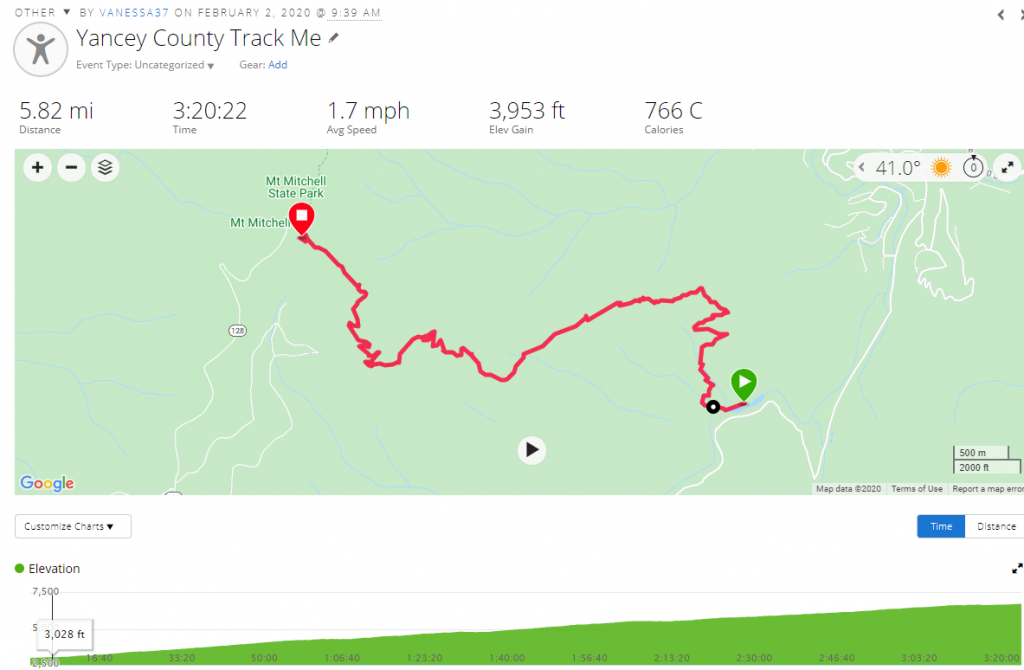 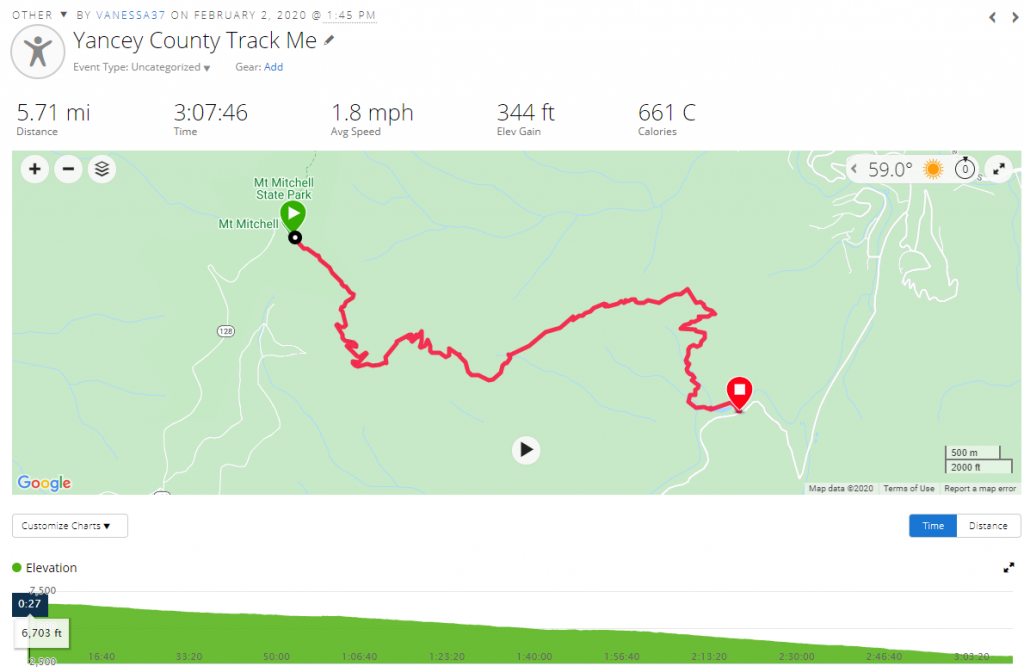