Gear: Once again… hot! (ugh) so I wore my new-to-me Oiselle crop, Oiselle shorts, and my usual (Smartwool socks, Altra Kayente racing shoes, Garmin 935 watch, Whoop band, Nuun electrolytes). I also tried out my Bose Soundsport wireless headphones for the first time in race. AND I finally remembered to use my “Fierce Flyer” tattoo from Oiselle 😉 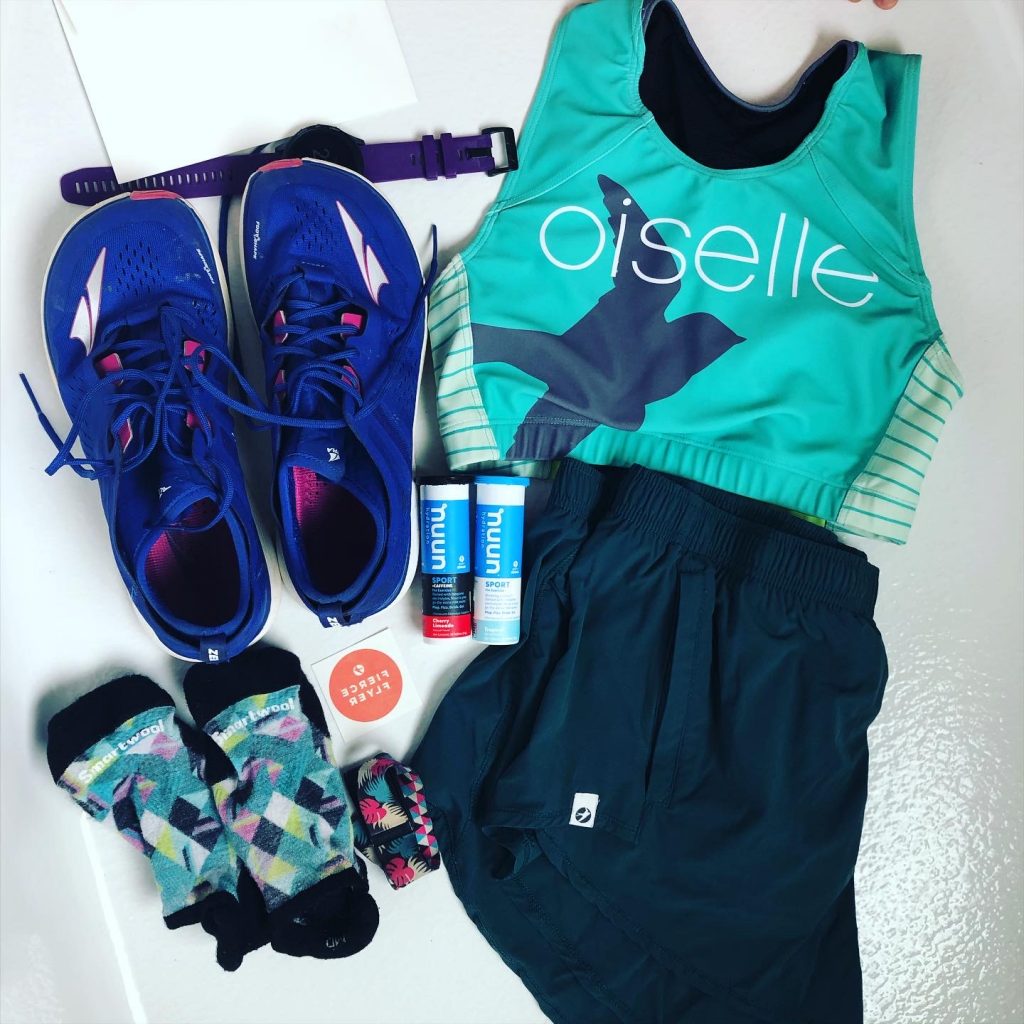 Gut: A late day race (5 PM) means a weird day of eating. I tried to time it right but ended up eating lunch a bit early, then having a snack later. Writing this 3 weeks later, I don’t remember exactly what I ate, other than rice. I felt a little unsettled in the tummy heading into the race, but thankfully it behaved while I ran!

Weather: 75* and cloudy. About 20 degrees hotter than I wanted, but I had to just go with it. Thankfully it was cloudy for most of it, with a nice breeze.

Pre-Race: I showed up around 4 to pick up my packet, then chilled in the van for about 30 minutes. After a 0.8 mile warm-up, stretch, and bathroom break, I met up with my neighbor & friend, LS, and her family and friends. I also saw my former coworker BH, who’s doing this race series also.

Race: It started off well enough… I tried my best not to go out too fast, but I’m sure I did (since I slowed down every mile after that).

The course was a lollipop shape—running across Elm Street, over to the Greensboro Country Club area, 2 laps around the golf course, then back to Gibb’s Hundred for the finish. Each mile had uphills and downhills and turns, so I didn’t find my groove, and I started to get hot about 2 miles in. I started getting passed by other runners left and right. Discouraging. I knew it wasn’t going to be my day, so I just tried to push as much as I could without red-lining. I really wasn’t feeling great, physically, but wanted to keep a good spirit mentally. I worked on some positive self-talk: “Who cares if you have a slow time? Your “slow” is someone else’s fast!”

Ironically, a sign came in the form of a song:

After Hours by We Are Scientists

The song gave me comfort, and made me laugh a little that it came at just the perfect time! Also, I was thrilled that my wireless headphones were performing perfectly.

On the second lap, I finally found someone to run with, around mile 4, and just followed him until mile 5-6, when he slowed and I passed him. I couldn’t see anyone in front of me, which I really dislike. I like having someone to chase, or at least draft behind, and it also helps to know where to turn by watching the person in front. I had to pay more attention to where I was going. I picked it up a little (mile 6 was my third-fastest mile, lol), and really picked it up for the final 0.2 stretch (7:10 pace—if only I could run that pace the whole time!)

I knew I didn’t run a great time, but still finished knowing I had given my best on the day, and felt happy about that.

Results: Sadly, I came in 8th of 19, so definitely no age group award here. The top 3 in my age group all ran 51 and some change, which would have been doable for me in a different time & place. I shook off my disappointment quickly though (the beer helped, haha!). Official results here.

Recommend: Yes! This was a fun venue—I had never been to Gibb’s brewery, but I liked the set-up (and the free beer! Plus snacks!)

I also liked the race T-shirt, and the competitive field that showed up. Definitely a fun race to attend as a spectator, because you can sit on the little hill and easily see runners coming down the street.

The medal is awesome too! 🙂

I realized after this race that I’m just not feeling longer distances right now. Not even a 10K!

I’m going to focus on short distances for the time being, and see if that will help my overall speed.

Next up: the final race in the Race Series, the Greensboro half marathon, which—you guessed it—I’m going to move down in distance to the 5K 😊